In 1997 the owner Pia Mortari and Sabrina Balestra dedicated to restoring and restructuring the structure; At the end of the work, the project was published in the journal CASE da ABITARE.

From the dictionary of architecture by Pevsner, Fleming and Honour (published by Giulio Einaudi, 1981): “Trullo, a still existing farmhouse in Apulia, from the Greek Tholos; On the Tholossi you will find one of the constructive principles of primitive architecture: it consists in superimposing concentric layers of parallelepipeds/stone blocks (often like megalithic and protruding hands), thus creating a space with the type of pseudovolta or pseudocupola, often finalized by a key plate (the central segment is usually inserted at last)”. Out of love for these primitive architectures and the rough Apulian landscape between Ostuni and Martina, fifteen minutes from the sea, a woman from Milan decided to stay in a trullo or, better, in two of them (the smallest was for guests) who are on a 1 hectare farm of undeveloped land, planted with olive, almond and fruit trees; the rest of the vegetation consists of bushes and scrubs typical of the Mediterranean vegetation called “macchia”. The renovation of the main scroll, to which a smaller complex had been added giving space for the bedroom, kitchen and the bathroom, lasted more than five years and consisted not only of making the building habitable and very comfortable (a whirlpool bath was even installed in the bathroom), but also of making it brighter. “It took a lot of effort to assemble these buildings. In the beginning there was a project that was well designed and defined in every detail, but during construction the trullo’s personality seemed presumptuous and indomitable and the trullo came as it wanted. In Puglia these archaic constructions are magical. They all have signs that differ from one another; They are reconciling, religious, pagan symbols. On the little trullo you can see a guardian angel from a distance … “[from the Abitare magazine, summer 1997]

In 2000, the trulli were bought by the Giampietro family, who, keeping the original project and respecting the environment, built a swimming pool and made the outdoor areas more utilizable. 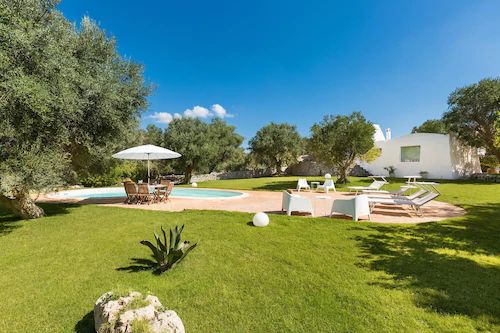